Scraped surface heat exchangers (SSHEs) are commonly used in the food, chemical, and pharmaceutical industries for heat transfer, crystallization, and other continuous processes. They are ideally suited for products that are viscous, sticky, that contain particulate matter, or that need some degree of crystallization. Since these characteristics describe a vast majority of processed foods, SSHEs are especially suited for pumpable food products. During operation, the product is brought in contact with a heat transfer surface that is rapidly and continuously scraped, thereby exposing the surface to the passage of untreated product. In addition to maintaining high and uniform heat exchange, the scraper blades also provide simultaneous mixing and agitation. Heat exchange for sticky and viscous foods such as heavy salad dressings, margarine, chocolate, peanut butter, fondant, ice cream, and shortenings is possible only by using SSHEs. High heat transfer coefficients are achieved because the boundary layer is continuously replaced by fresh material. Moreover, the product is in contact with the heating surface for only a few seconds and high temperature gradients can be used without the danger of causing undesirable reactions. SSHEs are versatile in the use of heat transfer medium and the various unit operations that can be carried out simultaneously. This article critically reviews the current understanding of the operations and applications of SSHEs. 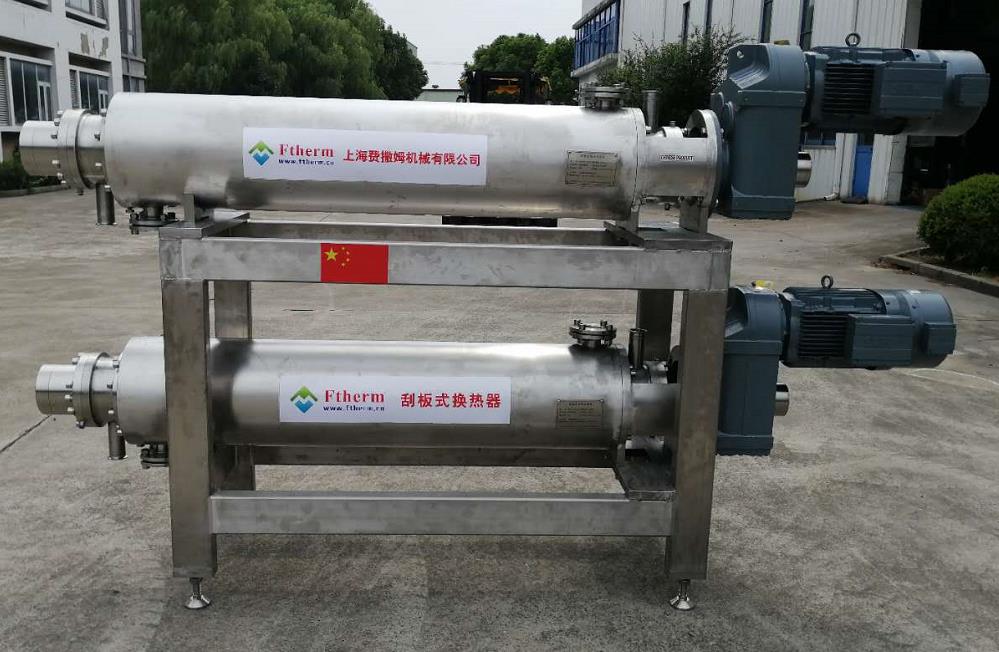 Scraped surface heat exchangers (SSHEs) are one of the most versatile pieces of processing equipment. SSHEs handle products that are viscous, that contain particles, and that tend to deposit and form films on the heat transfer surface. Operational versatility makes SSHEs especially attractive for food processors (Darlington, 1972). SSHEs are mechanically aided, turbulent film heat exchangers. The rotating scraper blades continually remove any deposition on the heat exchanger surface, thereby maintaining the heat transfer rate and enabling extended runs without fouling (McDonald, 1974). The versatility of an SSHE also lies in the use of different heat transfer media (i.e., water, brine, steam, freon, and ammonia) for the products that require remarkably different processing (i.e., mixing, emulsification and whipping). Numerous products are heated, concentrated, and cooled using SSHEs (Charteris et al., 2002; Kim and Mersmann, 1997; Lavigne and Ollivon, 1997; Liu and Garside, 1999; Loisel et al., 1997; Loisel et al., 1998; Pedersen, 1999; Regand and Goff, 2002; Spiegel, 1999). In the manufacture of confectionery products, SSHEs are used for such tasks as mixing of emulsions, gelatinization of starches, caramelization of sugars, and removal of water (Szemplenski, 1983). In ice cream manufacture, the appropriate mix is pumped along with air in o the SSHE and the action of the rotor inside the tube blends the air in o the mix (Darlington, 1972; Smith, 1972). The freezing medium in the jacket, typically ammonia, freezes the water in o finely dispersed ice crystals that are continuously scraped from the wall and incorporated in o the ice cream. These intricate processing requirements of ice cream manufacturing make SSHEs an ideal choice.

Product quality of multiphasic foods is dependent on shear rates during processing. Higher shear rates, as in the case of SSHEs, provide a way to form more stable multiphasic systems. SSHEs are used to crystallize desirable products from highly viscous liquids (Levine, 1993). It is common to use SSHEs in crystallization operations including dewaxing (petroleum oil, oils, and fats), separation (xylenes, and benzenes), and preparation of various fatty acids (Armstrong, 1969). SSHEs are used in margarine processing as crystallizers (Edmunds and Budlong,1976; Miskandar et al., 2002).

SSHEs are being used as an investigative tool to study effects of shear rates on food microstructure in systems such as ice cream (Regand and Goff, 2002), oils (Lavigne and Ollivon, 1997; Liu and Garside, 1999; Miskandar et al., 2002), milk fat (Van Aken and Visser, 2000), whey proteins (Spiegel, 1999), chocolate (Loisel et al., 1997; Loisel et al., 1998), emulsions (Charteris et al., 2002), and starch (De Coninck and Vanhemelrijck, 1990). For food processors, SSHEs provide a way to control the microstructure via effective regulation of shear rates. There has been some advancement in this aspect of SSHEs where shear rates have been linked directly to food microstructures (Regand and Goff, 2002; Spiegel, 1999).

SSHEs have improved significantly since Vogt first patented an ice cream freezer in 1928 (Trommelen and Beek, 1971). SSHE design has been improved to enhance their specific application, whether for use as heat transfer units, crystallizers, and chemical reactors (Harrod, 1986). Their use in food processing continues to expand due to the versatility of fluids that can be processed (high viscosity, particulate), their versatility as a processing unit (heat transfer, crystallizer, chemical reactor) and applicability as a research tool. For these reasons, interest in the use of SSHEs in modern food processing is likely to increase in the future.

The last reviews on the subject of SSHEs appeared in the mid 1980’s (Harrod, 1986; Abichandani et al., 1987). These reviews focused primarily on the transport phenomena (heat transport and mass transport) in the operation of SSHEs. Since then, several critical papers have been published that investigate flow patterns (Corbett et al., 1995), heat transfer (De Goede and De Jong, 1993; Dodeja et al., 1990; Mehta and Donoian, 1990; Miyashita et al., 1993), residence time distribution (Abdelrahim et al., 1995; Lee and Singh, 1990), and overall hydrodynamics (Baccar and Abid, 1999). In this article, current understanding of the operations and applications of SSHEs is critically reviewed

Ice crystallization during the manufacture of ice cream

Control of ice crystallization during the manufacture of ice cream is important for the development of proper texture, product quality and storage stabilit...

In order to undstand the mechanisms governing heat transfer and power consumption in a scraped-surface heat exchanger (SSHE), it is necessary to study the flow in this type of apparatus. By suspending polyethene beads in glycerol/water s...

In this paper local flow investigations under isothermal conditions have been established for a narrow annular gap reactor (NAGR, given by a rotor/stator s...

This paper deals with numerical study of the coupled fluid flow and heat transfer within a scraped surface heat exchanger ldquoSSHEsrdquo. The finite volum...

Viscous dissipation plays an important role in the dynamics of fluids with strongly temperature-dependent viscosity because of the coupling between the ene...