Heat transfer in presence of a high viscosity fluid may be substantially enhanced using heat exchangers supported by a mechanical agitation system that can also “scrape” the exchange surface (Scraped Surface Heat Exchanger, SSHE). In this case, heat transfer efficiency depends strongly on exchanger and agitator geometries, agitation methods as well as fluid characteristics and heat transfer conditions. Correlations used to represent the phenomenon are closely related to the above parameters and hardly employable out of that peculiar context.

In this work some results of an experimental research on SSHE performances, used as the evaporator of a refrigeration cycle in a commercial soft ice-cream machine, are presented. The liquid ice-cream mixture goes in o this component where it is mixed with a variable amount of air and cooled to obtain soft ice-cream. The mixture has a non-Newtonian fluid behaviour that involves a lot of problems related to its physical representation: some assumptions on ice-cream rheological properties have been accepted. Varying ice-cream mass flow, input/output temperatures of the liquid mixture and the agitator speed, ice-cream production tests were carried out. Two heat transfer coefficient correlations are proposed to describe experimental data: the first one arises from the classical dimensional analysis while the second one is related to the agitator engine power consumption. Finally, the experimental results supply a reliable database to find possible improvements in ice-cream machine efficiency. 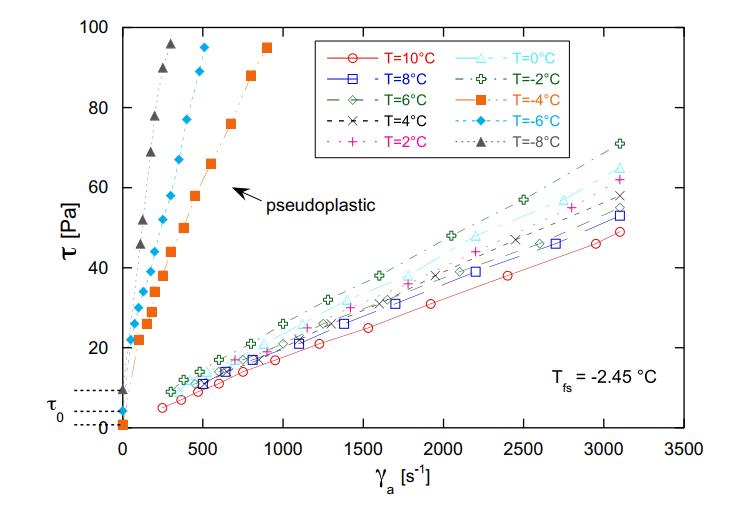 ► A semi-empirical relationship correlates the heat transfer coefficient to the impeller rotation speed.

► A useful tool for the design of evaporators installed in soft ice-cream machines is provided.

We are able to present two heat transfer correlations for the  Scraped Surface Heat Exchanger installed in a commercial soft icecream machine. The first one has been developed using the dimensional analysis tool, looking for different dimensionless groups allowing a better representation of SSHE features. In spite of the same computational method, the presented relationship differs from that in Ref. as the process fluids are different: solideliquid mixture instead of liquideliquid mixture. This is in agreement with findings by other authors. The second correlation is a semi-empirical relationship straightly correlating the heat transfer coefficient to the impeller rotation speed and to the ice-cream mix exchanged power as well.